The Best $5 I’ve Ever Spent 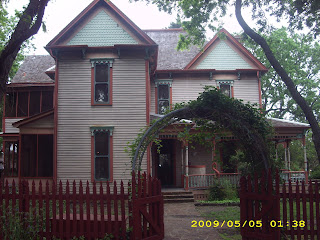 When my mother handed me the information for the Heritage Farmstead Museum, I knew it was a place I needed to go to further understand farm life at the turn of the century—the 20th century. Finally I had a free day and took off. They only do docent-guided tours at 1:30, but I showed up at 12:30 to look around the grounds for a little while on my own. I took pictures and imagined my characters living and working in such a place.

At 1:30, no docent had arrived. Finally, at 1:45, the director of the museum came to give me the tour herself. So there I was with this wonderful historian, just her and I, walking through this enormous museum-house and discussing what would be available to an average person and when they might own it, admiring the reproduction paint colors and wallpapers, and studying the original furnishings, clothing, toys, etc. As we talked, I discovered that she has done research on the home front during World War I. She invited me to come back and visit with her about that another day. My conversation with her as well as all I saw in the house was absolutely invaluable and would have been enough to make my $5 worthwhile. But when we stepped outside, this lovely lady handed me off to the Executive Director of the Museum, who took me around the rest of the buildings in the “farm yard.”

Again, a fascinating historian who answered every question I threw at him. At the end, he gave me his card and an invitation to call or email as well as the name of the director of another such place that focused more on town buildings and would be another good source of information. Two hours of individual attention from two historians steeped in the time period I am working in. See what I mean? Definitely the best $5 I’ve ever spent!